The 6th of December 2013 or the date when the “Samichlaus” (St. Niklaus) comes to the children in Switzerland was officially declared as Swiss Day at this year’s Christmas Market in the garden in front of the former Mausoleum.

The two huts close to the left of the stage were dedicated to this event. In one of them the Bulgarian Chamber of Commerce BSCC on behalf of the Swiss Embassy presented Switzerland to the public with brochures, pictures and Swiss music. The freely distributed Swiss hats, scarves and other give-aways as well as the chocolates, cookies, mandarins and nuts (typically given by St. Nicolas to the kids on that day) met a huge demand and were well appreciated by the visitors of the market. Also all 15 premade little bags with those ingredients were sold and the revenue given to charity.

In the other hut some very committed Swiss women offered Raclette – a typical Swiss cheese delicacy. Another hit of this day was the possibility for kids to bake “Grittibaenze” (bread made from a special dough and formed as little men). Both these events were only possible with the big engagement by some Swiss residents in Sofia and the support of the Hilton Hotel. The Swiss Embassy and the Bulgarian Chamber of Commerce would like to officially thank all involved for their efforts. 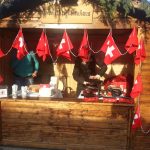 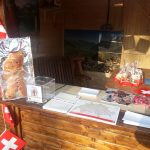 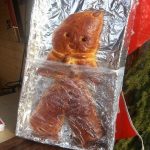 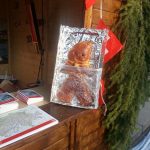 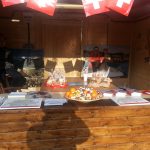 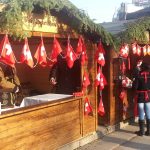 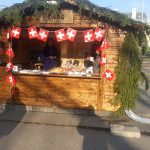 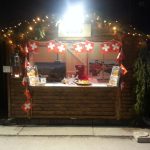