Deputy Minister of Economy, Lyuben Petrov, and Andre Urech, owner of the Swiss company Palemontech, turned the first sod of the company plant for metal containers and pallets in the Technology Park near Montana. The Swiss investor informed that the plan is to build the plant for about a year. The amount to be invested is BGN 6 mln. and 100 work places will be opened for the people in the town and the region. The facility will be erected over an area of 5,600 sq. m. and on an own plot of 3 ha purchased two years ago from the Municipality of Montana. Andre Urech announced that the production will be at the highest technology level. He intends to support financially the opening of a class at one of the gymnasiums in Montana to train specialist for the plant.

The mayor of Montana, Zlatko Zhivkov said that the local authority has supported the investor within its capabilities and is glad for that he has chosen Montana to build his plant. The Deputy Minister of Economy, Lyuben Petrov emphasized that each investment in North-West Bulgaria is a win for the government that has promised to develop the region and support it in catching up with the other regions in the country in terms economic development. The investment is also a signal to other investors that the North-Western Planning Region has potential and it should be used, Petrov said. He appealed to the investors to use the opportunities of the new Innovation and Competitiveness Operational Programme. 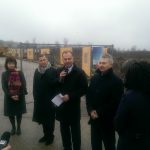 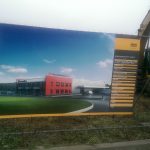